You Know More Than You Think You Do!

This article, by Irene Panke Hopkins, was originally published in the October 2017 issue of 48° North.

One Woman’s Discoveries about Equal Partnerships, Sailing Knowledge, and Self-Confidence

On a recent sunny evening, a handful of women from my dock at Shilshole Bay Marina watched in awe as Cathy, our liveaboard neighbor, rode the boson’s chair up the mast to help messenger in the spinnaker halyard on her new boat. As we watched, one of us asked, almost in a whisper, “Have you ever gone up in a boson’s chair?” A quiet chorus of “nopes” was the unanimous response. 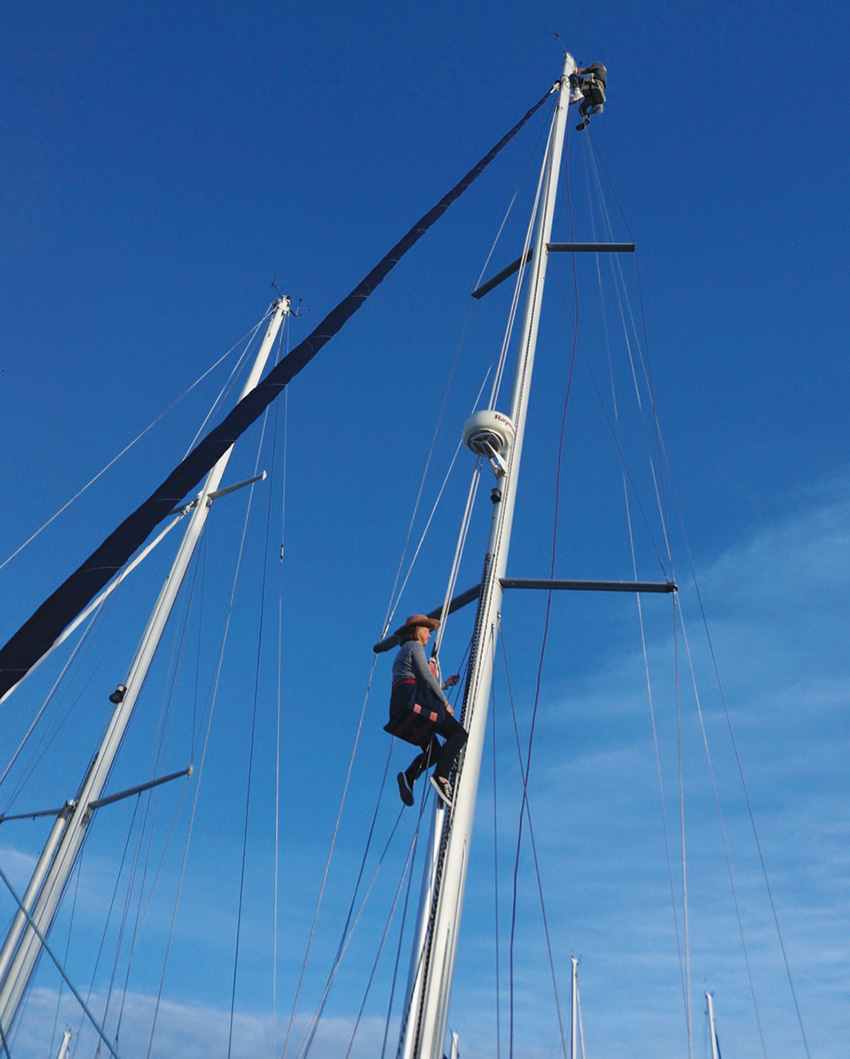 Cathy going up in the bosun’s chair.

The ensuing conversation revealed our respect for the women in our community who do it all: wiring, repairs, rigging and hard-core sailing, be it racing or local and bluewater cruising. But it also exposed our individual and collective feelings of inadequacy compared to many of our fellow boaters when it comes to the more technical aspects of boating.

Speaking for myself, I have definitely suffered from imposter syndrome when defining myself as a “boater” despite 30 years of cruising and nearly 10 years living aboard. However, at this point, if I were to list all that I know about boating, it would be impressive, even to me. So what that I don’t change the oil, or water the batteries, or put new belts on the alternator. Knowing that those are even “things” counts.

When we began cruising many years ago, my husband, Dan, who grew up sailing and ran his own marine electrical and systems business, took charge. I had already fallen in love with the water: the sparkle of sunlight on the overhead, the vast scenic vistas, the salty smell of low tide and the constant breeze caressing my face. When the wind filled the jib, steadying us and pulling us across the Sound, I felt pure elation. But I didn’t know AC from DC and no matter how many times Dan explained mechanical details to me, they just didn’t stick.

Instead, I focused on making our boat a summer home. I provisioned and made curtains and tended to our young children who needed to be corralled and sunscreened and life-jacketed. I nurtured in them an appreciation of our natural surroundings, watching for porpoises and whales in the water, eagles and bears onshore. I studied guidebooks for the areas we cruised and read directions to Dan as he navigated into inlets and anchorages before electronic charts simplified that aspect of cruising. Our roles fell into the traditional gendered designations “pink” and “blue,” and it worked for us. Dan was happy handling his stuff and I was content with my role. We evolved as a boating couple, doing what each of us did best.

Years passed; we cruised further up the coast each summer; changing boats to suit our needs, culminating with the Discovery 42 that we now own. Without realizing it, I gradually became more adept at navigation and the functional aspects of our trips. I could confidently relieve Dan at the helm during long passages. I hooked onto mooring buoys and, at a dock, jumped off with the lines and tied us up. When we anchored, Dan headed up to the bow and I stayed at the helm, backing down until I felt the anchor set and got a thumbs up from Dan. I learned how to predict the length of a passage using basic navigational tools and I listened more closely to the marine weather for wind and sea predictions.

By the time we sold our house and moved aboard, we had spent 20 years cruising between Seattle and Prince Rupert. Nonetheless, I continued to sell myself short when it came to my role in our boating life. “You know more than you think you do,” Dan always reminded me when I bemoaned feelings of ineptitude. “Osmosis is a powerful learning tool.”

I learned the truth of Dan’s words the hard way. When Dan was in a serious accident several years ago, I was forced to take the lead, making sure things were functioning properly on the boat. Knowing what questions to ask proved to me how much I knew. We were living aboard and the boat was in good shape thanks to Dan’s fastidious maintenance. Fortunately, after a few years, Dan recovered enough for us to begin cruising again.

Before we got back out there, we scheduled a long overdue haul-out and spent three weeks in the yard, repairing the hull, replacing the zincs and painting the entire boat from the gunwales down. I was there everyday, sweating and swearing along with my husband and the kind souls who helped us. I was one of the few women in the yard and hated every minute of it, but it had to be done. In addition to helping with the work, I set up a break area: table and chairs, umbrella, a cooler full of drinks and regularly replenished snacks. I thought it would make things just a bit easier and as it turns out it was very much appreciated by other customers in the yard as well as boat yard employees who joined us from time to time. “I’ve never seen anything like this here,” said one awestruck yard-worker. I took it as a compliment! 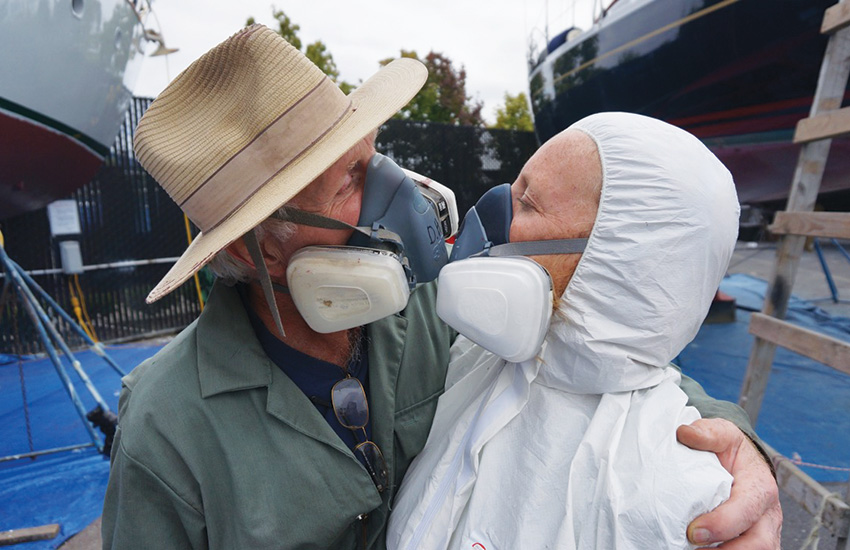 A rare romantic moment in the boat yard! What a great partnership.

As we cruised for the first time after Dan’s accident, I paid closer attention to tides and currents than I ever had, double-checking Dan’s timing. I stood at the helm with him, reading the chart and scanning the water for obstructions. With no kids to tend to, we worked together to get our sea legs back and move into a different phase of cruising as a couple.

When our prop became fouled by a line while anchoring in Frances Bay, just south of Yuculta Rapids, we knew that a dive was imperative. The last time we had a line around our prop was many years ago when we first started cruising. It did not occur to me back then to even offer to dive. But this time around, I knew that Dan was not up to it. As we limped into Von Donop Inlet on Cortes Island, hoping the water might be a bit warmer, I announced, “I’m going to do the dive.” Dan protested – but not too much. I squeezed into a wetsuit, grabbed a mask and a boat hook, and lowered myself into the water. It took the better part of an hour, taking a breath, going down, detangling a portion and then coming up for air. When the prop was finally freed, Dan was warm and dry and smiling! I was wet and cold, but my smile was bigger than his. Because I did it! 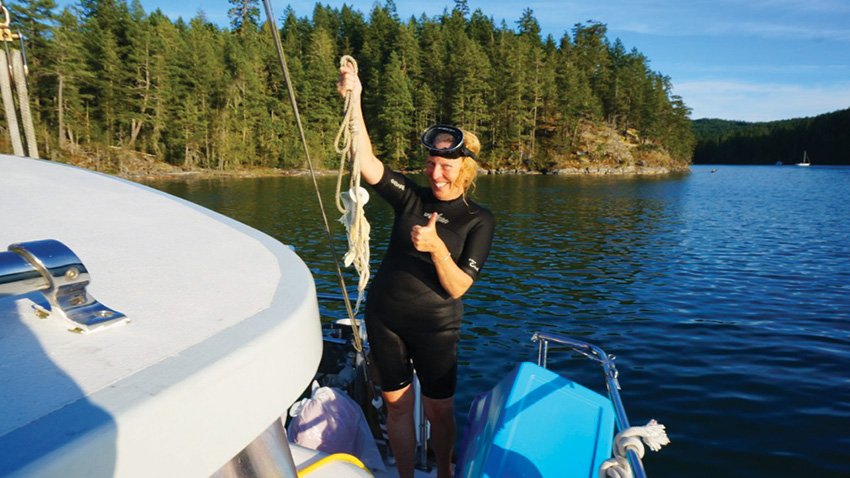 All smiles post-dive, ready to motor again and take on the next challenge!

Would my neighbors have been as impressed watching me free dive as we all were with Cathy in the boson’s chair? Probably. I knew exactly where the prop was having spent so much time under the boat in the yard. It didn’t seem like such a big deal at the time. But it’s now on my list of things I have done and can do.

Our to-do list for a two-month cruise this summer was long. Together we prepped and painted a cove stripe and applied the boat’s name to the hull. Dan installed solar panels, and did a host of other maintenance and upgrade projects. While he was working on those things, I gathered our navigation books, organized and studied charts, and provisioned the boat. I bought new rugs and made sure everything was stowed and tidy. I knew without any doubt that what I was doing was important.

While on Malcolm Island, near the northern tip of Vancouver Island, we met a couple cruising the upper Johnstone Strait area for the first time. They asked us a question about conditions and bailout plans, which I would normally have deferred to Dan. But I knew the answer and so I responded immediately. As the words came out of my mouth I felt a surge of confidence, realizing how much experience I have gained over the years.

There are as many levels of competency and involvement as there are women (and men for that matter) in the boating community. We work as a team and all contributions have worth, whether we are installing solar panels or making the boat a home. Let’s kick gender designations to the curb because everything we do makes a difference, for the better, in our boating experience.

Irene and Dan have returned from cruising and are back at home in Seattle.