#TBT: Aliens Have Moved Aboard Our Boat 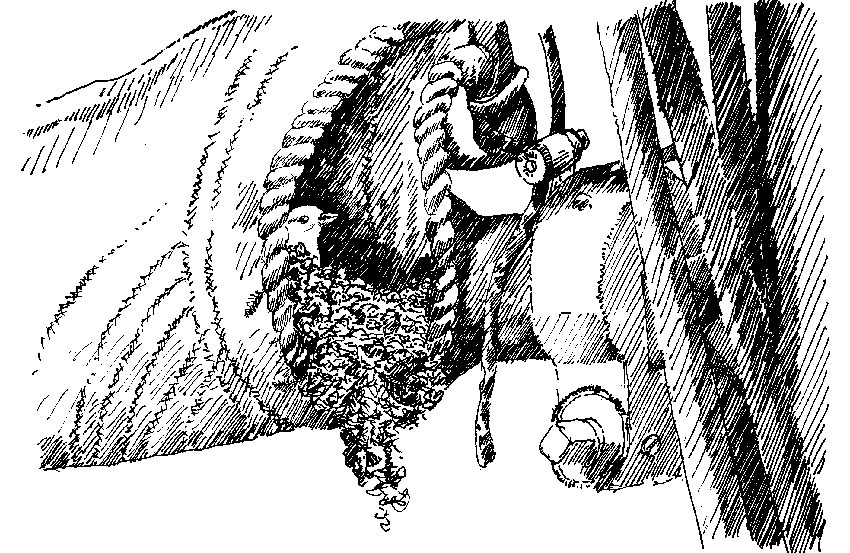 From the September 2005 issue of 48° North by Larry Eifert

While we were gone for a month, transients moved aboard our boat. No kidding! And we’re not talking just about an overnight party, but a flighty couple looking for a new home, a place to raise a family.

This sad tale must have started when we took an afternoon spring sail, lasting much too long and putting us back on the dock just at dusk. We put the sail covers on in a hurry to leave, and, well, maybe they weren’t as tight as they should have been. You know the drill, all those little snaps and you get to the point where you know you can leave a few of the underside ones unbuttoned. “It’ll let the air in, help dry the sail if any rain comes in the seams.” But it seems that little sloppiness also let someone else in. 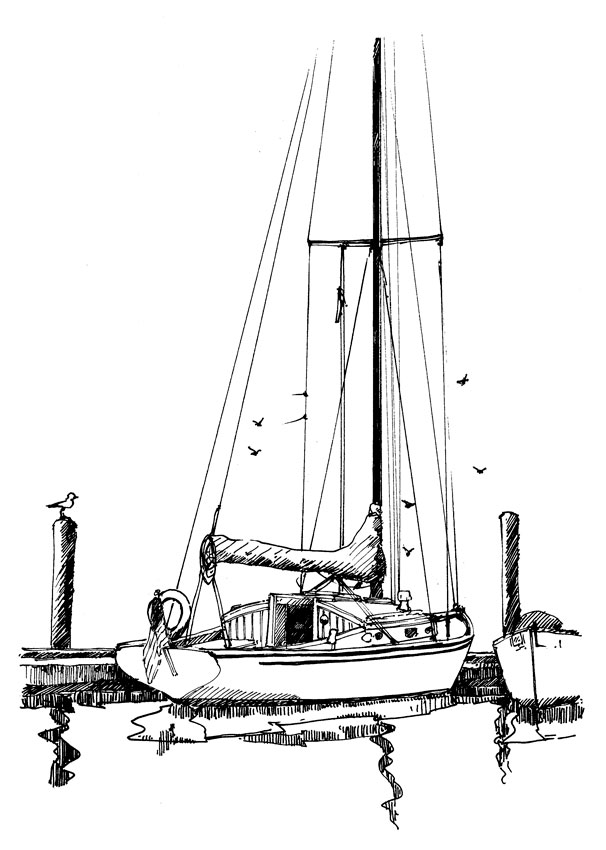 After a month away on a trip we came down to the boat to clean her up, and we kept noticing two house finches, small songbirds, continually circling the cockpit. Finches are beautiful little birds that most everyone has, at least occasionally, on their backyard seed feeders. Sparrow-sized, they have more triangular-shaped bills specialized for cracking seeds and grain. The male has a brilliant red chest but the female is much more subtle. The two birds kept up an agitated chatter between themselves, circling the boat, landing occasionally on lifelines and spreaders, sometimes even perching on standing rigging if it was slanted enough. Well, so maybe they understood that we are ‘bird people’ and wanted us to put up a feeder on the boat. Whatever it was they were up to, we carried on our business, washing the boat and generally getting things shipshape again.

Next day when we returned to the boat, there they were again, and this time I began to watch what these little guys were really up to. It seemed one would approach the mast end of the mainsail cover, then become troubled and fly off again. Then, in a moment, the other would repeat this same drill. So I approached the mast, circled the boot and immediately saw what was going on. Getting down on my knees and peering up under the boom there was an undone snap and a few small feathers stuck to it. Hum, just enough space there for a small bird to first land on a horizontal line, then jump up into the inside of the sail cover: and there it was, a nest in the fold of the sail – and several pairs of small eyes looking at me. Holy cow, the boat had become a homeless shelter for house finches!

There were all manner of ideas about how to proceed. All our boaty neighbors came over for a peek under the sail cover. Some were worried about the birds, some worried about the sail. And thanks to an Alfred Hitchcock movie a few decades ago, some were even afraid of the entire business. All had ideas about how to get rid of our alien feathered intruders, this wayward band of vagrants, these migratory drifters possibly covered with infectious and deadly Asian Bird Flu or West Nile Virus. We spoke to the entire family, explaining in plain English that we wanted our boat back, we wanted to sail, a race was coming up, and we had plans somewhat different from theirs and we didn’t want to turn our boat into a nursery. The parents, as usual, eyed us and chattered between themselves. The babies said nothing – as usual.

In the end, we recomposed ourselves and intellect took a hand. We did a little research on finches.

House finches are normally found in open woods and suburbs, where they eat a diet almost completely of seeds. Even finch babies in the nest get a straight menu of regurgitated seeds from their parents. Adult six-inch birds are mostly brownish with indistinct streaks. The male, however, sports a flashy orange-red forehead, chin and breast. While their song is a mixed warble, in flight (that is a series of flaps and glides), their soft yet husky weet, weet, weet trails behind them like a verbal banner. This is a bird anyone could like. They raise several families a year, and each brood usually has four or five (so that meant the nest had more than just the two or three pairs of eyes we could see). We also found out that while it probably took 12-14 days to hatch the newly laid eggs, it takes 11-19 days to fledge birds out of the nest. Doing the math, it seemed that within a few days they might be ready. 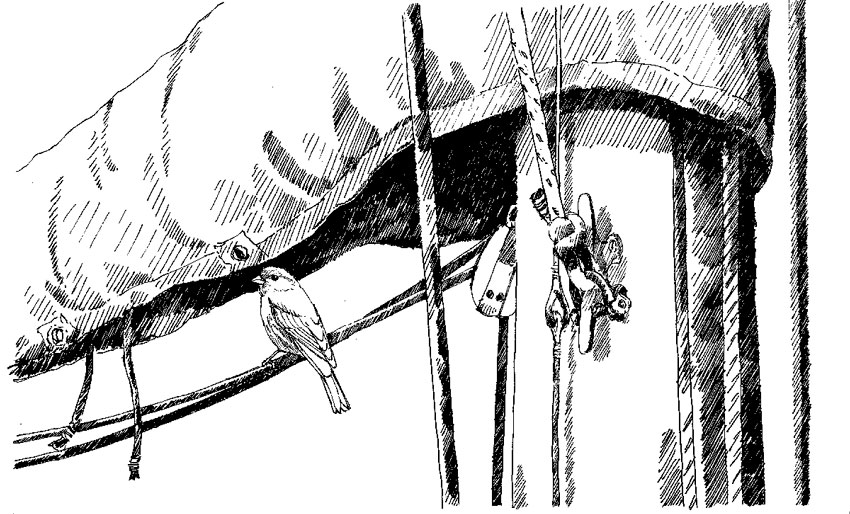 Two days later we made our move. For the big event, Nancy had purchased a little birdhouse that had a removable top. Our grand plan was to gently open the sail cover, smoothly lift the nest out (with dossal babies in tow) and put the entire shebang into the bird house. I even put tape over the birdhouse hole so they wouldn’t escape once we got them secured (and covered the INSIDE of the hole so no young baby feathers might stick to the tape. Once secure we could hang the birdhouse on a nearby piling, whip the tape off and family could have a proper house. It was Habitat for Humanity, finch-style.

Ever so gently we unbuttoned the sail cover. Inch by inch we carefully rolled it back. The nest box was ready. We moved in for ‘the kill.’ Then all hell broke loose. Birds everywhere, flying here, banging off the sails, falling on the deck, knocking themselves silly against the rigging. It was ‘learn to fly’ class without an instructor and the students were going berserk. There was one bird still up in the sail, having decided to fly the wrong direction into the fold instead of out of it, but it soon  got turned around and joined the fray. The parents were frantic, and as we watched the entire family fly off in separate directions I doubt we have ever felt so helpless – or guilty.

But Mother Nature has a way. I watched as dad sat next to one youngster sitting on a lifeline a few boats away, the toddler weaving back and forth trying to keep balanced. Dad jabbered away for a few minutes then hurried away to console another. Mom did the same, and within an hour they had things under control. There were constant flights of fancy, as wings were tried out, landings made with clumsy awkwardness, crashes that undoubtedly left bruises, but the day ended with the entire family still alive and more or less together.

Now, I’m not saying I’m proud of kicking these little vagrants out into the cold world, but I’d say it was a fair compromise. We provided a safe home and helped a pair of songbirds bring their family into the world. They provided us with the joy of experiencing nature up close and in a very personal way. And it shows that boats can give you great experiences, even at the dock.