#TBT: A Prayer for Safe Docking 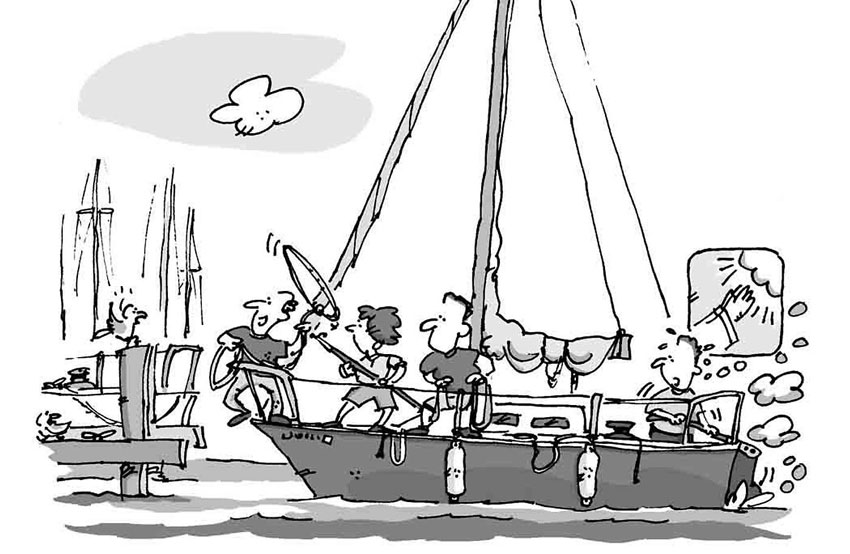 “The shore has perils unknown to the deep.”

Docking a boat is the equivalent of landing a Boeing 747, except that docking a boat is much harder. Unlike a plane, you don’t have the choice of landing into the wind, nor do you have a nice long runway to slow down on. You have one boat length in which to stop after you’ve got your bow pointed into your berth. You can’t slow down, because then you can’t steer. You simply have to perform a miracle each and every time you come back to your slip: you must have enough speed to perform a right-angle turn from the fairway into your slip, and then, two seconds later, you must have the boat fully stopped and perfectly positioned three inches from the dock so your crew can step ashore and make fast the docklines.

This might not be so bad if it were simply a matter of practice. But in many marinas there are currents to contend with, currents that change in strength and direction with the state of the tide. Your boat is also affected by the strength and direction of the wind. This adds up to a combination of circumstances that is rarely repeated. Practice doesn’t help. Each new landing is different from all the others, and you have to use all your skill and senses to ascertain (in the limited time of approach) what’s going on and how you’ll cope with it. If both wind and tide are urging you forward into your berth, how will you stop in time?

Returning to a marina slip is an especially anxious time for owners of traditional-keeled sailboats. Such boats were designed and used long before we invented marinas with their congested slips and narrow fairways. They’re usually heavy-displacement boats. They turn slowly in wide radiuses. They were designed for moorings, anchorages, and long unobstructed wharves. It would be difficult for the old-timers who built these boats to believe how we’ve let ourselves be herded into modern marina slips like cattle in slaughter pens, with no room to sneeze or scratch an elbow.

Some boats are vastly more maneuverable than others, of course. Here are some boat types listed in order of ease of berthing, presuming they have no bow or stern thrusters:

If your boat rates a 7 or 8, it’s close to suicide to try docking in most marina slips. Some marinas won’t even let you try because of the damage you can cause to the floating jetties or moored boats. They have a rule that prohibits sailing in the marina. They know, as Einstein did, that the dollar amount of the damage caused is a square of the speed at the time of collision. If you hit a dock or a moored boat at 4 knots, you do four times the amount of damage you’d do at 2 knots. Lord help you if you hit at 6 knots. That’s nine times the damage, compared with 2 knots.

It seems never to have occurred to the designers of marinas that what they’re asking skippers to do to park their boats is actually impossible. It’s simply not within the power of a human or a boat to make the transition from a 2-knot steering speed to a dead stop 3 inches off the dock in 30 feet or two seconds, whichever comes first.

It’s only because of the bravery of crews risking their limbs to take a flying leap ashore, get a stern line around a cleat, and snub hard, that it’s possible at all to guide a boat into the tiny patch of water her owner pays a small fortune to rent. In some areas, crews also have to get lines around poles with the skill of a cowboy roping a steer. There ought to be annual awards, like the Oscars and the Tonys, for the brave, talented souls (often the distaff half of the crew) who execute these tasks at risk of life and crushed limb. We could call the awards the Dockies and fly people to Seattle for a gala evening of presentations, presuming the winners are not too badly injured to travel.

To add to the fun of mooring, there is always the possibility that reverse gear won’t be there when you need it. This has happened to me twice in my boating career. The first time, the transmission simply wouldn’t go into astern when I needed it. But at least I knew that at the time and I had three seconds in which to perfect my panicking before the crunch came. The second time was much more insidious. While I was coming into port under power, the wire from the engine controls fell off the little arm on the gearbox. I was stuck in forward gear and didn’t know it.

I put the cockpit control into what I confidently imagined was neutral as we approached the slip at idle. I noticed we were going faster than normal, so as we headed into the slip I selected astern gear and revved the engine mightily. But although the gear lever was in reverse, the gearbox was still going firmly ahead. We leaped forward and T-boned my dinghy (which was sideways across the head of the slip) with a heart-stopping crunching noise that made heads swivel and eyes pop all around.

The dinghy was damaged quite badly, and in fact never fully recovered. Even after we had pulled them apart, the boat kept wanting to nudge forward and gore the dinghy some more. It wasn’t until all hands had made her fast with a considerable struggle that I realized that the engine was not in neutral after all, but still in forward gear.

A woman acquaintance of mine who has a great deal of boating experience, and who lectures at U.S. Power Squadron classes, confessed that she was scared to bring the family sailboat into its marina slip, and always let her husband do it.

“My objective this year is to learn to dock the boat,” she said. “I’ve come to the conclusion that the difference between men and women is that if a man makes a mess of docking and hits the pier hard, he’ll go right back and try again, no matter what damage he caused. He can’t believe it was his fault. If a woman makes a mess of it she thinks it’s her fault because it’s too hard for her, and she won’t want to try again.”

Now, you may think, with some justification, that praying for a safe docking might seem frivolously trivial to a Higher Being already fully occupied with outbreaks of disease in Asia, war in the Middle East, and ferries sinking all over the place in Bangladesh. Nevertheless, the promise is that the meek (that’s us) will inherit the Earth, so we all have a right to be heard. In that case, how about a short prayer that doesn’t sound like a prayer? One that sounds more like a small poem of praise or petition and a vote of confidence in a supernatural power who will take over and guide you safely alongside your dock.

Next time you’re in trouble on the final approach, place your left hand on the cruising guide and solumnly  repeat: The Prayer for safe docking:

Yea, though I glide through the valley of the shadow of disaster, I will fear no problem: for thou art with me; my fenders and my docklines, they comfort me.

Thou preparest a plan before me in the presence of mine smirking neighbors: a plan that will guide me miraculously into my dock as a finger squeezes into a glove. My cup of joy runneth over.

Surely envy and wonderment shall follow my neighbors all the days of their lives: and I will dwell in the house of Fabulous Boathandlers for ever.

Docking Tips: There may be times during docking in unfamiliar marinas when you badly need brakes. Have a small anchor and a long line ready to throw over the stern.

Always test your reverse gear in some convenient place before you enter your dock. Sometimes it isn’t there when you need it most desperately.

Even if you’re in a sailboat, if your engine fails on the open water it may be wise to spend $50 and call for a towboat to help you dock.

Alternatively, in calm water you may be able to use your tender and outboard motor as a tugboat. Make the dinghy fast at the stern quarter, with fore and aft springs as well as bow and stern lines. Use both the outboard and the ship’s rudder to steer.

As you approach your dock, always note the direction of the wind and current. If one or the other is moving with you on final approach, docking will be more difficult. If both are moving with you, docking will definitely be exciting. Do your best to keep your boat speed down to the minimum you need to maintain steerage.

Use a minimum of three fenders, the bigger the better. If you have a history of crash landings, fender your dock too, especially the head of it.