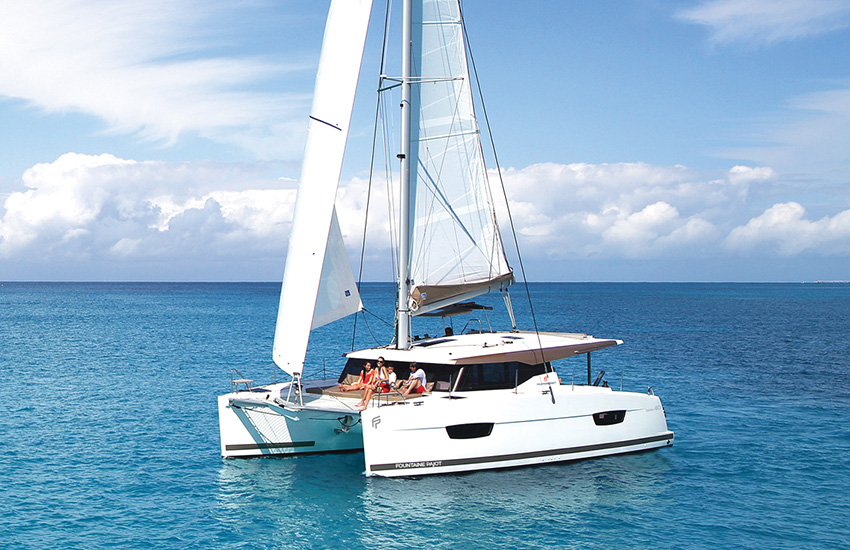 This article was originally published in the August 2017 issue of 48° North.

This month, we had the pleasure of sailing the new Fountaine Pajot Lucia 40. This voluminous and stylish cruising catamaran boasts most of the features that draw a person to this type of boat, and quite a few that make it distinctly unique.

Fontaine Pajot has a reputation as a builder of luxurious multihulls, both sail and power. In fact, the Lucia 40 is the smallest boat they produce. The Lucia 40 targets family cruisers and, in an interesting marketing twist, I believe Fountaine Pajot downplays some of the boat’s best attributes – speed and passagemaking strength – to focus on its accessibility, comfort, style, and ease of use. Indeed, these are also strengths of the Lucia 40, thanks to its massive cockpit with oodles of seating, swanky bow sun deck, short-handed-friendly helm station, condo-like interior space, and attractive lines that belie the space it affords. Nonetheless, I couldn’t stop thinking as we sailed, ‘this is a fast boat that doesn’t promote its performance; and this is a passagemaking boat that doesn’t make a big deal out of its offshore capabilities.’ Interesting!

This review reflects the interplay of two different-but-related conversations: “Conversation One” has to do with the comparative benefit of a cruising multihull versus a cruising monohull. This might seem basic, but much of what we talked about when we actually went out sailing could have been applied to most cruising cats (reef early, excellent maneuverability under power, generous living space, very little feel in the helm due to no heel angle and dual rudders). “Conversation Two” is about what makes the Lucia 40 stand out among some of its competitors in the cruising cat market (sailing performance, construction and design, visibility, ease of use).

The Lucia 40 follows the same trend that many boats around the world are: lighter is better. The product of the Berret-Raccoupeau design team has an all-up unloaded displacement of 8,900 kg. (19,621 lbs.). To put that in perspective, the only other cruising catamaran I’ve reviewed is roughly the same length, but weighed almost 25% more. Reducing weight in a multihull is a huge performance factor.

So, how does the Lucia 40 sail? In short, very well. Three of the 48° North crew helped cast off dock lines to take the boat for a spin. The first instance of Conversation One came up before we’d even left the slip. The boat gently backed off the dock and spun in its own length, rather than backing all the way out. I haven’t seen a monohull do that! As we left the marina, we connected the main halyard and took off the sail ties to get ready for sailing. I thought about going to the mast to jump the halyard, and then, “clicka-clicka-click,” the electric winch sucked up the line at a steady clip. The square-top mainsail was set within a minute and nobody broke a sweat.

Though the boat is comparatively lightweight, I would opt for the upgrade to the two 30 horsepower Yanmar diesels instead of the standard pair of 20s, a decision that had been made for this particular Lucia 40. Part of Conversation One is an acknowledgment that we sail upwind or downwind most of the time in the Salish Sea, and cruising cats tend to excel on a reach (a point of sail PNW cruisers don’t see all that often). The windward-leeward reality of our locale can mean more motoring or motor-sailing on a boat that doesn’t point very well. The bigger engines will not only provide more power, but, in my experience, three cylinders will run more smoothly than two cylinders. That’s related to another advantage for cruising cats – the engine compartments are not in the living quarters, which usually means a quieter experience when sailing under the iron genoa. There is excellent 360° access to the engines via hatches in the aft deck of each hull.

Though it’s no skinny monohull slicing to weather, the Lucia 40 performed admirably on all points of sail during our test run, including upwind. Neptune delivered comfortable sailing conditions for our July afternoon on Lake Union, with wind from the south at 6-12 knots. Our boat speeds were between three and seven knots, depending on the breeze and our point of sail, but we never stalled out. When the puff hits, the Lucia 40’s acceleration is palpable, delivering the kind of exciting performance you wouldn’t necessarily expect when flipping through the Fountaine Pajot catalog or browsing their website.

Considering the importance of upwind sailing characteristics in this type of design, we played with the apparent wind angle quite a bit. The boat seemed adequately powered up at 55° apparent, in both puffs and lulls, and kept way up to about 30° apparent. Your realistic VMG beating mode is likely between those two numbers, and I would guess it’s closer to 50° than it is to 30°; though the inverse might be true as the breeze rises.

I admit that I miss the “feel” in the helm when I’m sailing cruising cats. You get a little sense of the water flowing past the rudders when the speed comes up, but it’s pretty minimal. I found the wheel slightly hard to turn, which is a function of a traditional cable-based steering system. This is a Conversation Two element, as Fountaine Pajot chose not to make steering easier with a hydraulic system. This decision reflects the passagemaking optimization, as cable steering is easier to repair underway than hydraulic. The fact that the steering wheel doesn’t spin free and easy is also offset by the fact that any captain, especially one with a short-handed crew is likely to use the autopilot a lot. With the lack of feel in the helm and the resulting propensity for over-correction, I sheepishly admit that the autopilot drove the boat as well or better than any human sailor on the boat.

Steering system isn’t the only element aimed at offshore readiness. Numerous design components, from the shape of the bows to the raked salon windows to the distribution of the weight, indicate a boat that’s intended to sail in waves.

The sail plan we used comes stock with the Lucia 40, and includes a full-batten square-top main and 110% genoa. Our test boat was upgraded to include a bowsprit and gear for a flying sail, but had not yet been outfitted with a code zero or spinnaker. That extra sail power would have certainly increased our speeds, especially off the wind, but it’s not as if the boat felt painfully under-powered with the stock sail plan on any course above a broad reach. Returning to Conversation One, the variety of ways to rig flying sails with minimal gear is an advantage of cruising cats. You can fly a code zero or asymmetrical spinnaker off of the bowsprit (as you can on a monohull), but without dealing with a sometimes-cumbersome spinnaker pole, you can also fly a symmetrical spinnaker with tack points on the bow of each hull.

Easy short-handed sailing is a clear priority on the Lucia 40, and both sails trim to the set of three winches (one of which is electric) immediately in front of the raised helm station. Trimming visibility is good as cruising cats go, and you have a terrific view of one sail and an obstructed view of the other, depending on the tack you’re sailing (good view of mainsail on starboard tack and the headsail on port). This is a compromise with a single, offset helm station. A clever part of the design are the stairs adjacent to the helm, three steps take you down into the covered cockpit, and two steps up bring you to the top deck for access to your sails and rig. I imagine that a short-handed captain would utilize both sets of stairs on every sail. 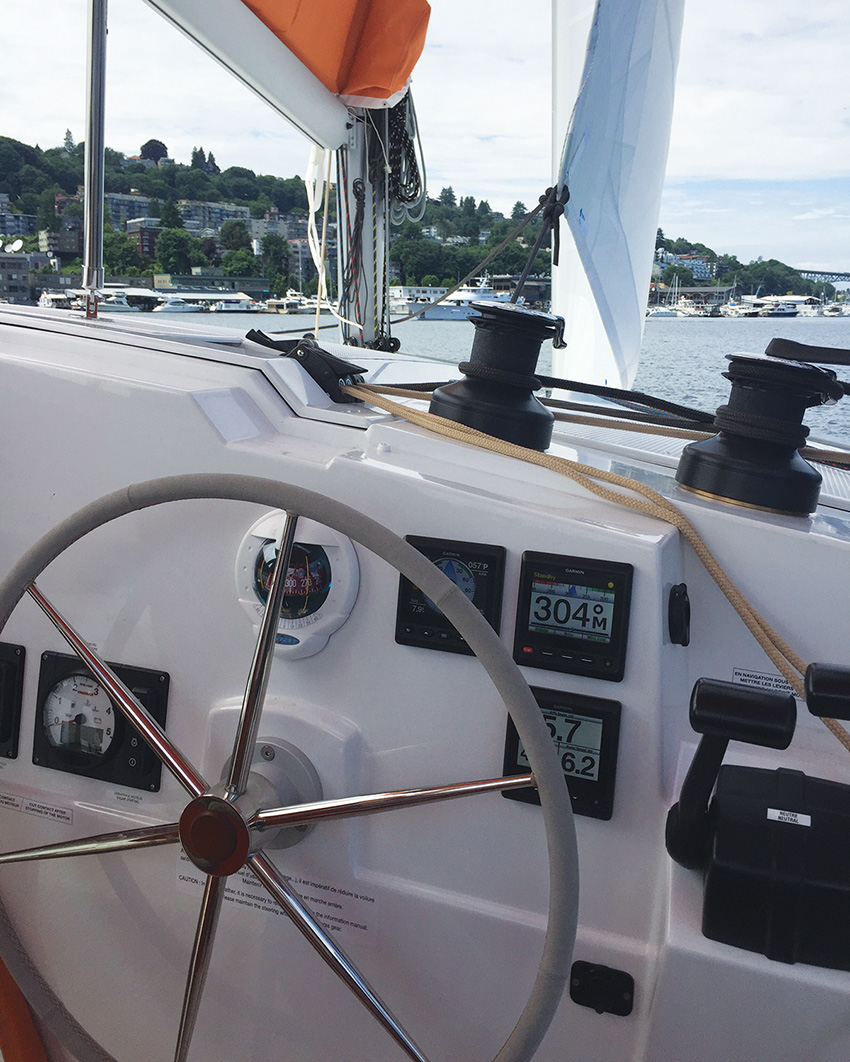 The boat is full of comfy luxuries, but the helm station is where the real magic happens.

I thought the sails trimmed up nicely for beating, and the position and short length of the headsail leads limit you to a fairly twisted shape. This is, in most cases, how you’d want to trim anyway. When we turned off the breeze, however, the lead position is way too far back. This is a non-issue if you have a dedicated downwind sail and you furl the jib. If you weren’t going to invest in a code zero or spinnaker, sail trim geeks will probably install barber haulers of some kind.

The mainsail is very malleable, thanks in part to a mainsheet traveler that runs almost the entire beam of the boat. The long boom delivers a lot of power, but makes it less of a high-aspect sail than some competitors. The flat-top main balances that to some extent. The rig has swept spreaders and no backstay, with diamond stays doing a lot of the heavy lifting.

The interior space is typically the biggest selling point in Conversation One. The Lucia 40 does not disappoint. The Maestro 2 version we sailed (one of four interior layout options), boasts a sizable island-berth sleeping cabin and the largest stand-alone shower I have seen on a boat under 40’. The head is in a separate room, giving the shower and vanity space normally reserved for landlubbers.

The galley and salon are bright, spacious, and very well thought-out, and the breezeway between galley and cockpit gives the primary living areas a seamless indoor-outdoor feel. Storage around this part of the boat is pretty good, but passagemakers would likely supplement in other parts of the boat (the big storage compartments in each bow, perhaps) to make up for what seemed, to me, to be a priority placed on livable space over storage in the galley and salon. With that caveat, there’s no denying that the Lucia 40 would be a comfortable, even luxurious, place for a family to call home; whether it is for a week, a month, or a year.

I maintain my opinion that the weather protection on a cruising cat makes it a fabulous fit for year-round sailing in the Pacific Northwest. The coverage in the cockpit, as well as the canvas covering at the helm station, provide weather-relief that’s in another echelon compared to many monohulls. The Lucia 40 represents this perspective beautifully and would be a joy on a November sail.

All in all, the 48° North crew was pretty blown away by the Lucia 40: surprised by its sailing performance, staggered by its comfort, and eager to sail it again.

Thanks to John Cooper and Josh Lowe from Signature Yachts for taking us sailing.